One of the most excruciating pains one can experience is the colicky abdominal pain caused by kidney stones. They affect approximately 10% of the adult population. 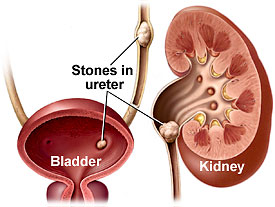 What Are Kidney Stones?

The development of kidney stones is multifactorial. The risk factors include age, lifestyle, race, geography, and even genetics.

Reports say that the highest incidence is in people who are 40 yrs and above. In one study, the mean age at the time of stone diagnosis was 45 years in men and 41 years in women, and the overall incidence ratio of kidney stones in men to stones in women was 1.73.

People who tend to drink less water tend to have increased risk in developing kidney stones because their urine is more concentrated and this predisposes them to formation of crystals and eventually kidney stones. Reports also found association between weight and stone formation. They observed that obese men and women have a higher risk to develop kidney stones. Persons weighing more 100 kg have a significantly greater chance of forming a kidney stone than those weighing less than 68 kg. Though it is not clear what types of stones are most prevalent in obesity, but evidence is suggestive of mostly uric acid stones. This may be due to the choice of diet of patients. On the other hand, it may also have an association with metabolic syndrome as obesity and hyperuricemia are both found in metabolic syndrome.

Data show that non-Hispanic white people have more kidney stones than do non-Hispanic black people and Mexican Americans at all ages while Hispanics and Asian people only have intermediate risk.

Certain geographical areas with greater sunlight exposure such as in the tropical countries lead to an increase in insensible losses through sweating because of the hot weather. This in turn may result in more concentrated urine and the increased risk of kidney stone formation. In addition, sun exposure enhances vitamin D production, which may predispose individuals to increased risk of developing calcium stones.

Calcium stones are the most common type of kidney stone. They comprise nearly 80% of kidney stones. They are made of calcium compounds, especially calcium oxalate. Calcium phosphate and other minerals also may be present. Conditions that result to high calcium levels in the body, such as hyperparathyroidism, excessive intake of supplements of calcium and vitamin D, and some metabolic bone diseases increase the risk of calcium stones. Inability to regulate calcium balance due to kidney failure can also increase calcium level and predispose to calcium stone formation. High levels of oxalate also increase the risk for calcium stones.

Uric acid stones composed about 5 to 10% of kidney stones. They are made up of uric acid, a waste product of the body that should normally be passed out in the urine. Increased levels of uric acid in the body, called hyperuricemia, can be due to increased intake of food or drinks that are high in uric acid or an inability of the body to excrete uric acid. This can be caused by a low urine output (decreased urine) from different causes such as dehydration, increased insensible water loss that is inadequately replaced with enough water intake, or even kidney failure. Hyperuricemia can also be caused by increased alcohol consumption, gout, or other diseases such as an inflammatory bowel disease.

Cystine stones composed less than 1% of kidney stones. They are made of a chemical called cystine. This type of kidney stone is one example of a stone due to hereditary factors. They develop in families with a condition that results in too much cystine in the urine – cystinuria.

PAIN – The classic manifestation of nephrolithiasis is severe ureteral colic and is often an abrupt onset of severe excruciating pain over the flank area. It is usually felt when the stone is travelling down and causes irritation and inflammation of the membrane of the urinary tract. The pain may migrate anteriorly along the abdomen and inferiorly to the groin, penis, or labia majora as the stone moves toward the ureterovesical junction. No position relieves the pain. The pain resolves with the passage of the stone.

Other symptoms that can be experienced by a person with kidney stone include nausea, vomiting, poor appetite, feverish, constipation, and generalized malaise but are not specific to kidney stone alone.

When the kidney stone is less than 10 millimeters at its largest diameter, conservative measures can be followed as long as 4 weeks hoping for the stones to be passed out without surgical intervention. Patients should increase their water intake to as much as 3 liters per day unless there are contraindications to increased fluid intake such as risk of pulmonary congestion, congestive heart failure or coexisting kidney disease such as kidney failure or nephritic syndrome.

Together with increasing fluid intake, medications to relieve the pain are given. Strong pain medications are usually needed due to the severity of the pain caused by the kidney stone. However, the more common strong pain medications such as nonsteroidal anti-inflammatory agents (NSAIDS) like celecoxib, etoricoxib, naproxen, diclofenac, mefenamic acid, etc are preferably avoided due to the possibility of increasing the risk of kidney injury that could possibly result from obstruction caused by the stone. Tramadol and paracetamol are the preferred pain medication in this case.

Agents to acidify the urine are also given to aid the dissolution of the kidney stones. Potassium citrate is one of the medications that is usually given for this purpose.

Larger stones that are already causing obstruction may require more aggressive measures. Nonsurgical intervention includes shattering the stone to smaller particles with the hope that they can be passed out in the urine. This is done with an extracorporeal shock wave lithotripsy (ESWL). However, some stones are not candidates for ESWL, hence, need surgical exploration to be removed. Examples are cystoscopic procedures such as laser lithotripsy or percutaneous techniques such as percutaneous nephrolithotomy. A ureteral stent is sometimes placed during these cystoscopic procedures to bypass the obstruction and aid in the passage of the stone as well as to prevent ureteral stricture after ureteroscopic stone removal.

Preventing Gout: Types of Food to Avoid, Lessen, and Increase

How to Get Rid of Tonsil Stones