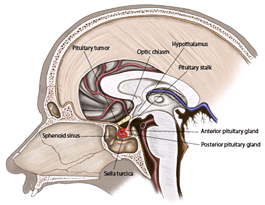 There are five distinct hormone-secreting cell types present in the mature anterior pituitary gland. These are corticotrophs, somatotrophs, thryrotrophs, gonadotrophs, and lactrotrophs 1.

It is essential to distinguish a pituitary adenoma from other parasellar masses because the management is different. About 90% of observed pituitary lesions represent pituitary adenomas, hence, initial assessment should comprise of determining whether the mass is hormonally functional or whether it will cause local mass effect. The onset of clinical features associated with disordered hormone secretion is insidious and may not be noticed by the patient, hence, laboratory tests to assess endocrine function should always be done 1. These include checking for the serum levels of IGF-1, prolactin, ACTH, serum cortisol, luteinizing hormone, follicle-stimulating hormone, thyroid-stimulating hormone and free thyroid hormones. Dynamic testing could also be done to exclude or confirm abnormalities in baseline laboratories.

The goals of management for pituitary masses are to alleviate local compressive mass effects and to relieve the patient from hormonal imbalance caused by hypersecretion or hyposecretion resulting from the tumor.

Prolactinomas are the most frequent functioning pituitary adenoma. It is very important to exclude such condition before surgical options are considered because this type of tumors can be managed medically. Prolactinomas are more common in females with a female to male ratio of 20:1. However, men usually harbor larger tumors. The management of prolactinomas also depends on the size of the tumor and if they are already symptomatic or large enough to cause compression of the surrounding structures during diagnosis. A single measurement of serum prolactin level that is above the upper limit of normal usually is confirmatory of a diagnosis of prolactinoma and dynamic testing is usually not necessary 2. However, other factors that might cause elevation of prolactin levels should be ruled out as well. In a patient with confirmed prolactinoma, the first line of treatment is dopamine agonist. There are two dopamine agonists that are approved in the market- cabergoline and bromocriptine. However, some patients do not tolerate the side effects of these medications or do not respond to maximal doses of these medications. For these patients, pituitary surgery and radiotherapy can be considered but with consideration of safety profile and prognosis. 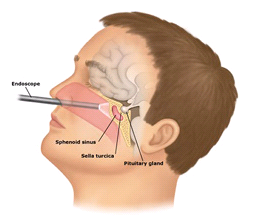 Most other pituitary adenomas are non-functioning, that is, they do not secrete a specific hormone that would cause hormonal abnormalities in patients. In these patients, the mass are usually evaluated if local compressive effects are apparent. If they are small enough and they do not cause compressive mass effects, they are left untouched, with just serial monitoring of their growth and hormone levels of the patients, as necessary. On the other hand, if the pituitary adenomas are large enough causing symptoms and compressive mass effect on the surrounding tissues, surgery is indicated.

Transphenoidal resection of a pituitary tumor is usually the procedure of choice as it is less invasive compared to an open-brain surgery, with less complications and faster patient recovery. However, complications could still happen and these include hypopituitarism, CSF leak, diabetes insipidus and local infection.

Radiotherapy is reserved for malignant prolactinoma. This type of treatment may take 20 years for maximal effect to take place and is not free of complications as well.2

Temozolamide, a new agent that can decrease prolactin levels and control tumor growth, can also be considered in malignant prolactinoma.2